The ground-breaking workshop was specially designed to educate the students, aged 11 to 16, about how attitudes and behaviours can lead to all forms of violence – bringing together the Gender-Based Violence Strategy and the work of the city-region’s Violence Reduction Unit (VRU).

It is hoped that similar workshops will be rolled out in school and colleges across the city-region later this year. 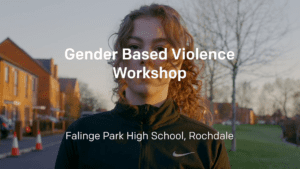 The first event, which took place at Falinge Park High School in Rochdale last week, was supported by Mentors in Violence Prevention (MVP) Director Graham Goulden. The session was designed to drive cultural change through examining language and behaviours.

Students taking part were shown a video created as part of Greater Manchester’s #IsThisOk campaign, which has received more than five million views after it was released last year. The video shows a young woman being sexually harassed while she is jogging, coming out of a coffee shop and out at night. After its release in December, a number of celebrities and high-profile figures praised the video for highlighting the impact of Gender-Based Violence including singer Beverley Knight, MP Jess Phillips, radio DJ Shaun Keaveny, columnist Grace Dent, and journalist Victoria Derbyshire. 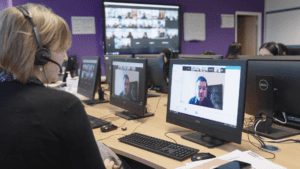 The Mayor spoke to pupils about Gender-Based Violence and the ongoing work the school is doing to educate pupils, as well as the behaviours and attitudes that cause it. Student Ruhani Hussain introduced Ismail Malik and Tahmid Asraf who are White Ribbon Ambassadors for the school, as well as girls from the schools’ Women and Equalities group. A total of 245 boys from the school have signed the White Ribbon pledge to stand up against violence towards women and girls.

Mayor of Greater Manchester, Andy Burnham, said: “Taking the #IsThisOk video to schools and colleges in our city-region is a key part of Greater Manchester’s Gender-Based Violence Strategy, however, this is just the start of the work that needs to be done to tackle this issue. The students took part in a Q&A with me and it was fantastic to hear their passion and desire to make a difference, and to have them challenge me on what else can be done to tackle violence against women and girls.

“We want Greater Manchester to be one of the best places in the world for people to grow up, get on and grow old – no matter your gender. Rather than women being forced to change their behaviours to feel safe, it is men and boys who need to take responsibility for this issue, either by reflecting on and changing our own behaviours or challenging those of people we know.”

Janice Allen, headteacher at Falinge Park High School, said: “This is an extension of the work we do in school to address problems in society that are complex and require reasoned dialogue.

“Our work on this has been extensive over time, is underpinned by the Universal Declaration of Human Rights, and we wanted to complement this work by giving young men and women a chance to talk and share about their learning and their thoughts and hopes with an external presenter. The Gender Based Violence Strategy has given us an anchor to be able to address this more thoughtfully and we are grateful to the team for enabling our children to share their thoughts.”

Following the virtual call with the Mayor, the young people took part in discussions and were put in realistic scenarios as part of the MVP programme. The aim of these scenarios is to raise awareness, challenge thinking, open dialog and inspire individual leadership. The workshops focus on supporting boys to be the best they can be, with 25 schools and colleges participating in the programme ran by the VRU.

If you would like your school to get involved in a workshop, email GMVRU@greatermanchester-ca.gov.uk.